A rare, c 1750-1780, forged iron coiled rattlesnake made with excellent detail throughout. With a 2” diameter, it would have been likely carried by a militiaman or officer as a symbol of America’s desire for independence.  The rattlesnake can be referenced at museums and in printed publications as a symbol of the American Revolution  for independence by way of “Join or Die” published by Ben Franklin in 1751 to unite the colonies during the F & I War and again in 1775 to unite the militia and the country with “Don’t Tread on Me” during the American Revolutionary War.

Significance of the Rattlesnake to Militiamen and America

In the December 27, 1775, edition of The Pennsylvania Journal, Benjamin Franklin wrote about why he believed the rattlesnake was the ideal image for the colonies:

“[The rattle-snake’s] eye excelled in brightness, that of any other animal, and that she has no eye-lids. She may therefore be esteemed an emblem of vigilance. She never begins an attack, nor, when once engaged, ever surrenders: She is therefore an emblem of magnanimity and true courage. As if anxious to prevent all pretensions of quarrelling with her, the weapons with which nature has furnished her, she conceals in the roof of her mouth, so that, to those who are unacquainted with her, she appears to be a most defenseless animal; and even when those weapons are shewn and extended for her defence, they appear weak and contemptible; but their wounds however small, are decisive and fatal. Conscious of this, she never wounds till she has generously given notice, even to her enemy, and cautioned him against the danger of treading on her.”

I know this excavated forged rattlesnake is rare because in my 60+ years of collecting it is the only period one I have encountered. One blacksmith said to me;  “making it would be very difficult!” It certainly has a history of Rev. War militia and possibly from the F and I War. Yes! it certainly is a wonderful piece of American folk art.

The condition is excellent and I, as did collectors before me, chose not to clean it, but I have to admit, I was tempted. 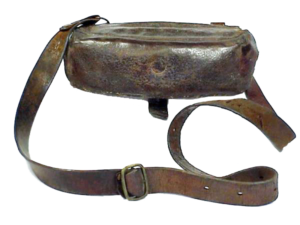